Unlocking the Mysteries of Fred Missile’s “A Little Bit Free” 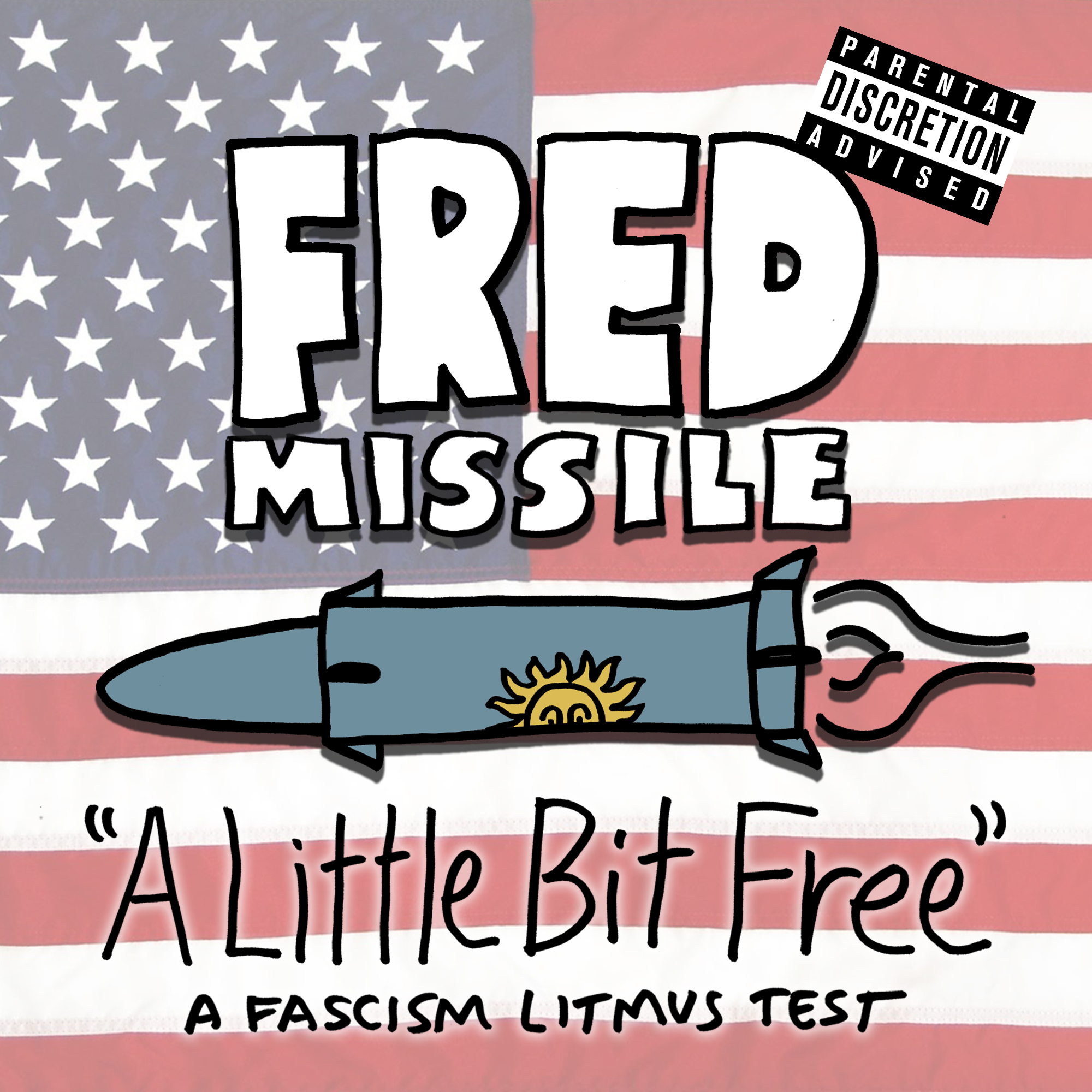 Lump’N’Loaf Records is proud to present Fred Missile’s “A Little Bit Free: A Fascism Litmus Test,” a collaboration between members of A Halo Called Fred, New Jersey’s Geeky Tupperware Psycho-pop band, and punk poet laureate John S. Hall of King Missile fame. “A Little Bit Free…” is available for free download (with a Creative Commons license) at fredmissile.bandcamp.com and lumpnloafrecords.bandcamp.com with an accompanying video on YouTube.

We sat down with A Halo Called Fred’s Geverend to dig deeper and seek answers to questions about life, liberty and the creation of “A Little Bit Free.”

Q: First off, what’s the backstory to how Halo and John S. Hall first connected?

A: We first met and started performing together back in the late ’90s. John performed at a few shows in New Brunswick, NJ, and we did a number of shows together in the East Village around that era. We reconnected recently for the Freaky Mutant Weirdo Variety Show, our yearly music/performance/circus sideshow event held at Dunellen, NJ’s Roxy and Dukes Roadhouse, and started performing together as Fred Missile doing a number of classic King Missile songs as well as some of John S. Hall’s newer material.

Q: How did the song come about?

A: It started out as a regular Halo song – Witnessing how the US government’s policy are becoming more and more fascist, we felt like it was important to not keep our mouths shut and start to say something about it. In keeping with our own style and sense of humor we felt like the best course of action was to record a song that NO fascist government would allow its citizens to create, and use it at a test to see if things were as bad as they were appearing to get. When we got to the middle section — it felt like a “King Missile-esque” spoken word section was in order, and rather than attempt to write it ourselves, we went right to John, knowing he has very similar political beliefs and knowing how uninhibited he is in expressing those beliefs.

Q: For those who might not know, how would you explain fascism and what real life examples can your provide?

A: Fascism, in essence, is a government led by an all powerful dictator who cannot be questioned. Hitler is the biggest example in recent history of course. But there are elements of fascism in all sorts of world governments today

Q: Explain what a litmus test is?

A: In chemistry, a litmus test is a simple test that determines how acidic or alkaline a substance is. The term has come to mean any simple test that proves something decisively. In our case, this song is a fascism litmus test, because it proves decisively that anyone who attacks this song as “un-american” has fascist tendencies. Now we’re not saying you need to LIKE the song — you are as free to hate it as we are to write it. And we will defend your right to hate our music to the ends of the earth! But if you truly support freedom of speech and artistic expression, songs like this must be allowed to exist!

Q: Explain what is and why you are releasing the song with a Creative Commons License.

A: We want this song to be shared freely! Creative commons licenses grant the listener to listen and distribute freely! The particular license we’re using is the Creative Commons Attribution-NonCommercial-ShareAlike 4.0 International License:

This work is licensed under a Creative Commons Attribution-NonCommercial-ShareAlike 4.0 International License.

This license grants anyone the right to distribute the song or create derivative works for any non-commercial use, as long as full credit is given to the original authors! This includes remixes, videos, you name it! The only thing we don’t grant is the ability for others to use the song for commercial use – basically if you want to make money off our song, you have to secure individual licensing for that.

Q: The song is particularly vulgar. Are you concerned about any possible negative reaction from fans who know Halo more for their quirky, funny songs?

A: Well — those who have known us for a  long time know we’ve always been pretty damn vulgar!  Sure we clean up our act for family friendly shows, but we’ve never hidden our raunchier side.

Q: Do you have any plans on performing the song live with John S. Hall

A: No specific plans at the moment. But we will definitely discuss it at our next show together!

Q: Are there any plans for a Fred Missile album?

A: No, it is not something we have discussed.

Q: What are you hoping to accomplish with releasing A Little Bit Free?

A: The most important thing, as with any song or work of art, is to just express what we feel. And in this day and age, with the president  threatening investigations into mainstream comedians who mock him, it seems like even expressing what we feel, a fundamental right of all Americans is under threat. It’s a fundamental right we as a society need to make sure isn’t lost. Now I’m not saying cursing out the president will undo all his other fascist policies, we need to fight fascism at all it’s levels. But I hope that this song can at least be a rallying cry for those who feel the same frustrations we do, and highlight the free speech this country was founded on.